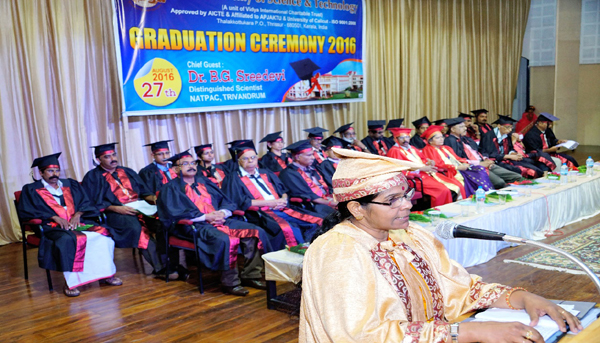 The graduation ceremony for 2012-2016 batch students of Vidya academy of science and technology was held on  27-06-2016. The registration for the graduands started at 8:30 AM. The students collected the robes from the group tutors at the time of registration. Registration in the respective counters were closed at 9:40 AM. The entry of the parents to the auditorium were strictly restricted to 10:00 AM. The rehearsal for the function was done between 10:00 AM to 10:45 AM. The Guest of honour reached the venue and the graduation ceremony started by 10:45 AM with the entry of academic procession. The president of the function, Mr. Sudhakaran Pollassery ( Former Trust Vice Chairman) , invited The principal Dr.Sudha Balagopalan to welcome the gathering and also to  introduce  the guest of honour. After the welcome speech, the president  of the function invited the Guest of Honour, Dr. B. G. Sreedevi, Director, NATPAC, Trivandrum, for the Convocation address. The principal presented a memento to the guest of honour after the convocation address.

The certificates for the distinguished students of each department were awarded by The Chief Guest Dr. B. G. Sreedevi. The M-Tech students were awarded certificates by Dr. Mahadevan Pillai, Governing body, VAST, which was followed by the award of certificates to MCA students by Dr. K. B. M. Nambudiripad, Professor, ME. The award of certificates to B-Tech students were  announced by respective HoDs and awarded by Mr. Suresh Lal, Dr. Sudha Balagopalan, Adv. Reghynathan Kazhungil, Er. G. Mohanachandran, Dr. T.N. P. Nambiar and Prof. Sulochana M. V.  for CE, CSE, ECE, EEE, ME and PE respectively. Later on, the Oath taking by the recipients were initiated by Col. M. P. Induchudan (Retd.) , Professor(CSE). The Graduation ceremony reached to an end with National anthem followed by the return of the Academic procession. Later on, group photo sessions were arranged for respective branches and finished by 12:45 PM. The food courts were open upto 3:00 PM and the program was succesfully finished by 3:00 PM. 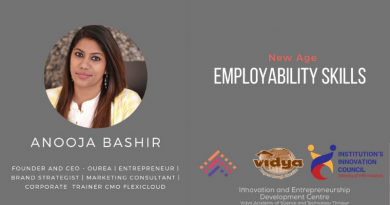 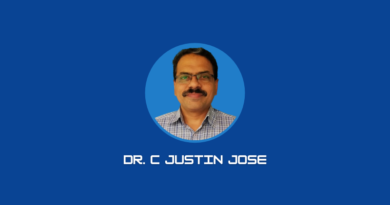 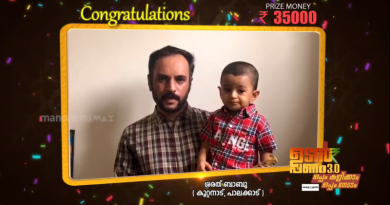