Talk by a Computer Science Prodigy 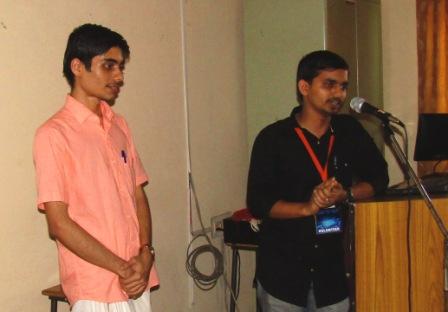 Mr Nadakumar Edamana is studying for B Sc (Comp. Sc.) in College of Applied Science, Vattamkulam, Edappal. The publishers of Info Kairali, a widely-read computer magazine in Malayalam, has already published two books authored by Mr Nandakumar: one dealing with the free software GNU-Linux and and one on computer security. He has also developed several special software to help visually challenged persons use an English-Malayalam dictionary. He is also a regular contributor to Info Kairali. Mr Nandakumar could easily be described as a computer science prodigy with a lot of humility and a tonne of commitment to the free software movement. Surprisingly the organisers of Chip-to-Net 2.0 spotted him  among the participants of the workshop. After some discussions, it was decided to give Mr Nandakumar a chance to talk to the MCA students of the College. The talk was arranged in the AN of 20 January 2017 and he talked about his journey through the world of computers and software. It was a never before experience to the all students who listened to the talk.