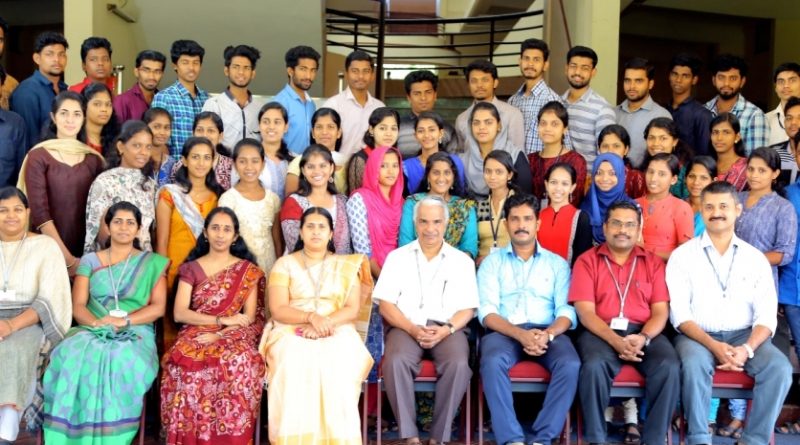 The Department of Computer Applications organised a Two-day Workshop Chip-to-Net 2.0 for the students of the neighbouring arts and science colleges during 19-20 January 2017. As many as 45 students from ten different arts and science colleges participated in the workshop.  This is the second time the Department is organising such a workshop.  The first one was organised in January 2015.

The activities of the workshop began with a brief inaugural ceremony held in the Seminar hall of the Department. Er G Mohanachandran, Executive director, VICT, inaugurated the Workshop by lighting the traditional lamp. Dr K B M Namboothirippad participated in the ceremony as a special guest and offered felicitations.  Mr Manesh D welcomed the participants and Ms. Siji K B offered a formal vote of thanks.

A highlight of the Workshop was a a fully hands on session on Google sites handled by Dr V N Krishnachandran, Head of Computer Applications Department. This was given during the FN session of 19 Jan 2017. In the AN session, there was a “Un-screwing and Re-screwing” session where the participants were given an opportunity to see the inside working of a desktop computer.  This session was handled by Mr Sajay K R and Mr Dijesh P. In parallel to this session, the participants were engaged in developing websites using the

tools taught to them in the FN session as a preparation for participating the website creation contest.

On the second day of the workshop, there was a web-hosting session. The session was intended to give a hands-on experience in the steps involved in hosting a website. The participants were given domain names and spaces to experiment the processes of web-hosting. The web-hosting session was also handled by Mr Sajay K R  and Mr Dijesh P. In the AN session, Mr K P Krishnaprasad, Manager, Vidya IT Division, gave an interesting presentation on networking.

The fun-filed activities and learni

From the feedback received it appears that the participants left Vidya with a lot of good memories about the College.

A session in progress with the participants on rapt attention

Participants of the Workshop with faculty of Computer Applications Department 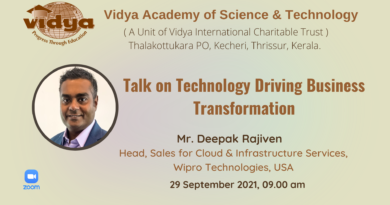 Talk on how technology is driving business transformation

A research paper from CSE Department 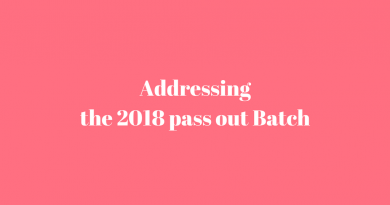 Principal’s exhortation to 2018 pass out batch students: Excel in placements